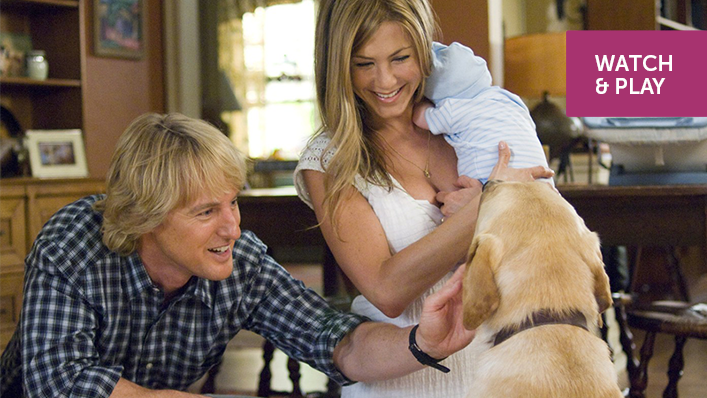 The best pet movies to stream

From Bob to Marley, there are some pretty cool movies about pets in all their shapes, sizes and species. Our furry (or feathery) friends provide us with unconditional love and endless amusement, and that’s what makes them so good on screen. So this week we wanted to highlight some of the best pet movies you can stream with the whole family.

The uplifting true story of how a stray cat came to the rescue of London busker James Bowen, a recovering heroin addict. Bob is a handsome ginger tomcat who follows James onto the bus one morning and becomes part of his street act. Remarkably, while actor Luke Treadaway plays James, Bob stars as himself, albeit with the help of some stunt doubles. It’s impossible not to finish this film filled with a warm glow of happiness.

From slightly zany director Wes Anderson, this film is set in the fictional Japanese town of Megasaki, 20 years in the future.  It centres around the mass deportation of dogs to a coastal rubbish tip known as Trash Island, under the orders of the town’s dictatorial Mayor Kobayashi (voiced by Kunichi Nomura) for supposed health concerns.  Twelve-year-old Atari (voiced by Koyu Rankin) goes to rescue his deported dog and befriends a motley crew of five canines (voiced by notable actors Edward Norton, Jeff Goldblum and Bill Murray) who help him in his search and continuous battle against evil.

Arguably the most original and engaging film featuring animals in recent history, Babe is an Australian icon that stands the test of time thanks to a wonderful storyline where the characters drive the narrative. Babe is a piglet won at a fair and brought home only to be adopted by an unlikely mother – the border collie, Fly. In a sweet turn of events, Fly teaches Babe to herd sheep. Witty, smart, educational and fun for the entire family.

Have you got the fastest broadband available for your house? Find out here.

This is one you’ll need the tissue box for. Based on a true story that took place in Japan 100 years ago, and a remake of a 1987 Japanese movie, Hachi tells the story of a music teacher (Richard Gere) who forms a lasting bond with a dog he finds on a train platform. Hachi becomes Parker’s constant companion, accompanying him to the station for his morning commute, then waiting all day for him to come home. But one day, Parker doesn’t come home… This is a sweet story about the bond between a man and his loyal dog.

Based on the Broadway play (in turn based on a book) and soon to be staged in New Zealand, War Horse is the incredible Steven Spielberg-directed story of the bond between a horse called Joey and his teenage carer Albert, who is heartbroken when his father sells Joey to serve as an officer’s horse in war. Albert joins the army to try to find Joey. An inspirational tear-jerker about love and loyalty.

Squarely aimed at a pre-teen audience, teenagers might find this a bit goofy, but older millennials will gush over the nostalgia of this early ‘90s flick.This is nevertheless a classic family story. Three pets, Chance the bulldog, Sassy the Himalayan cat and Shadow the golden retriever, try to find their way back across long distances and rugged terrain to the humans they have been separated from. Well-made and thoroughly enjoyable.

From the beloved novels by Michael Bond, Paddington tells the story of the comic misadventures of a young Peruvian bear who travels to the city in search of a home. It manages to be both old-fashioned and faithful to the original stories while jumping into the high-tech 21st century. It’s charmingly funny, delicately sweet and with enough quirky twists, like edgy Nicole Kidman as a taxidermist who wants to stuff Paddington.

When the Littles go to an orphanage to adopt a new family member, a charming young mouse named Stuart is chosen. While George, the eldest child in the family, is initially unwelcoming to his new brother, the family cat, Snowbell, is even less enthusiastic about having a mouse as his “master” and plots to get rid of him. Against these difficulties, Stuart resolves to face them with as much love and courage as he can muster. In doing so, he shows his beloved new family that great things can truly come in small packages.

Marley and Me (Amazon Prime)

Who’s a good boy? Not Marley. Although this labrador puppy can be cute-as, he’s also a monster who turns his new household into a disaster movie that threatens to derail the relationship between John and Jenny Grogan (played extremely well by Owen Wilson and Jennifer Aniston). There’s a lot of laughs in this film that’s based-on-a-true-story..

Though sources suggest that nine cats were used to stand in as Holly Golightly’s feline house guest, the role is credited to a trained cat named Orangey. How else would that final scene in Breakfast at Tiffany’s be achieved, without a tolerant creature to withstand the down-pouring rain, while being sandwiched between two lovers?

Jones, the four-legged ginger crew member of commercial starship Nostromo, is supposedly there to catch rodents on the spaceship (yeah right) but instead turns out to be great for faux scares and an excuse for character Ripley to talk out loud without seeming crazy.

I Am Legend (Lightbox)

Will Smith as the last man on earth fighting zombies does a good job in isolation but he couldn’t have done it without his expressive german shepherd, Sam. Smith’s scenes with Sam are the strongest in the film.

Daisy is the adorable beagle puppy who manages to warm the heart of Keanu Reeves’ cold-blooded assassin John Wicks. The filmmakers set out to find “the cutest dog in the world” and arguably managed it.