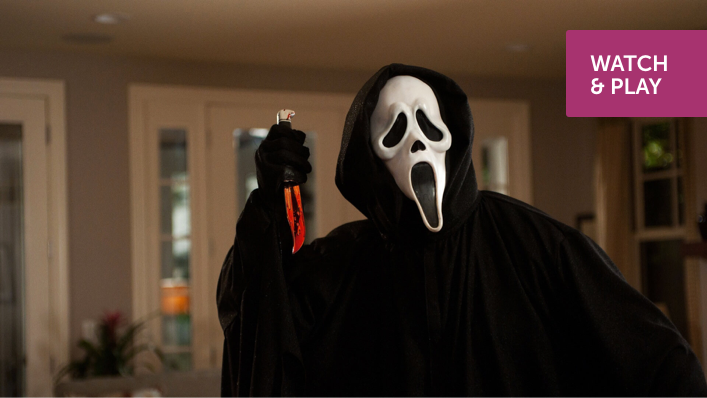 The best of: Teen horrors

Whether it’s slasher-style killers on a revenge spree, ghosts, sharks, spiders, zombies or that “thing” you can’t quite name but you know is out there, there’s a certain enjoyment from skin-tingling fright-night with friends or family.
If you’re looking for a thriller to watch on a rainy night, pick a flick from this list of some of the horror movies that have defined and redefined the genre for teens of all ages. From 13 right through to 19 there’s something here for everyone:

Don’t let a bad internet connection interrupt you…Click here to see if you have the best broadband.

Rated: PG
The horror of this 1990 classic depends on just how scared of spiders you really are. Yes, they are deadly but no, they’re probably not as scary as Jaws – although if you met one of these blood-syphoning beasties you’d probably run for your life all the same. This clever horror weaves a nice web of comedy throughout and suits younger audiences who might not be ready for full-on violent or graphic horror. It’ll make you squeal with fright and delight in equal measures.

Rated: PG13
A superbly moody, atmospheric, psychological ghost tale with Nicole Kidman at her finest. It’s a movie that delivers some of the creepiest chills-up-the-spine story-telling – way better than Sixth Sense, which it followed – and does it without needing to resort to graphic violence or gruesome scenes. The slow build-up of tension is irresistible, with the gathering of unseen forces making you feel as if you’re slowly drowning in dread.

Rated: PG13
What do you get if you cross Romeo and Juliet with a classic zombie flick and add a sprinkle of rom-com juice? As quirky as that might sound, Warm Bodies does for zombies what Twilight did for vampires and maybe does it better, given zombies are way less loveable than vampires. It’s clever, witty and romantic while remaining steadfastly dedicated to the macabre and horrific flesh-eating essence of a classic zombie flick.

Rated: R16
It’s impossible to overestimate how much of an impact Scream had on the horror genre in 1996. The slasher genre was – um – dying.  From the opening scene – one of the great starts of any horror movie in history – Scream breaks the rules and resets the trajectory of horror flicks. With a star-studded cast (Neve Campbell, Drew Barrymore, Courtney Cox, Rose McGowan to name a few) and a memorable villain in Ghostface, this fast-moving slasher-flick is scary, funny and rife with snappy dialogue. It stays one step ahead of the audience all the way to the subversive ending.

Rated: R16
Possibly one of the best adaptations of a Stephen King horror. There are people out there who are genuinely terrified of clowns – they should avoid this – as it takes the scary clown trope and ramps up the volume and intensity. A superb ensemble cast brings depth to this smart and funny ghost story. A real edge of your seat, gripping-the-person next to you jaunt of a haunt that doubles as a coming of age story – think Stranger Things with a real edge. With Chapter Two just released, it’s a good time to review the original.