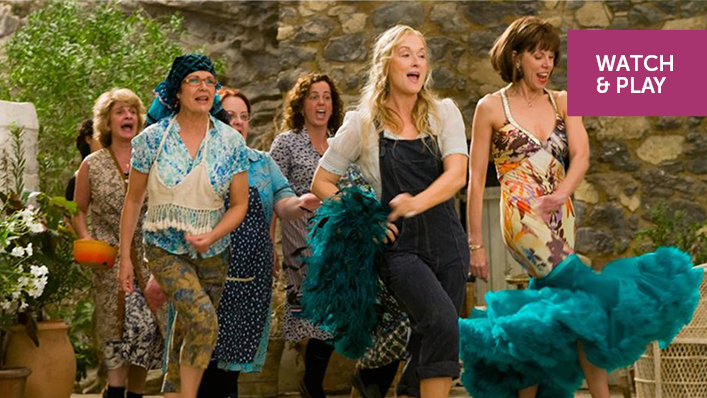 Films to watch with your mum this Mother’s Day

It’s nearly Mother’s Day - do you have anything special planned?
Why not really indulge your mother this year? Buy her some chocolates, a nice bottle of wine and sit down with her to watch one (or two) of these classic made-for-mum movies:

The movie that launched Julia Roberts to stardom, confirmed Dolly Parton was a natural actress and allowed veteran Sally Field to steal the show – which is some feat given the number of sparkling performances from an ensemble cast that includes Darryl Hannah, Shirley MacLaine and Olympia Dukakis. The story is set in a Louisiana beauty parlour where a tight-knit group of women gather to gossip and support each other. They are resilient, tough and funny (very funny) in the face of all the challenges life throws at them – of which there are many. These women are our mothers, sisters, grandmothers, aunts and daughters. A movie for the ages and for all mothers. As MacLaine said of the movie when it released in 1989: “If you've got women in your life bring them to see this film and you'll know much more about them when you go home.” That’s still true 30 years on.

There’s a Dolly Parton connection to this fun little film too – in that the movie is full of her amazing music. It’s a heartwarming trip through the whole mother-daughter relationship as well as dealing with body image in a positive and upbeat way. Australian actress Danielle Macdonald continues to up her ante after a stellar performance in Patti Cake$ a couple of years back. Here she’s Willowdean, the Dolly Parton-obsessed plus-size teenage daughter of the former beauty queen, Rosie (Jennifer Aniston). Rosie now runs pageants and Willowdean, along with some other misfits, enters one as a joke protest. It goes kind of how you expect but also not at all how you expect it – and threaded all the way through it are Parton’s best songs.

Tully is the third collaboration between writer Diablo Cody and director Jason Reitman. They gave us Juno in 2007 and Young Adult in 2011. There’s a lineage through these films of women at different stages of life – from adolescent to prolonged adolescent to adult yearning for adolescence. Cody’s writing style is to deliver highly verbal (almost too verbal) interactions laced with sarcasm, world-weary irony, all-knowing cynicism and subtle poignancy. And yet, in gaps between words there are profound, real observations. Here Charlize Theron, who also starred in Young Adult, is a new mother to a third child – exhausted, stressed and suffering post-natal depression and longing for her carefree years before motherhood. She’s saved by the night nanny Tully (Mackenzie Davis, best known for her role as Cameron in Halt and Catch Fire). This is a film that manages to be hilarious, tender, brutally honest and comes with an amazing twist at the end.

Body switch movies are such a great vehicle for exploring that tough psychological territory of seeing things from another’s perspective. And for walking a mile in another’s shoes, this one is way better than most – thanks mainly to the two stars who are clearly enjoying the acting. Single mother Tess Coleman (Jamie Lee Curtis) and her teenage daughter Anna (Lindsay Lohan) couldn't be more different, and it is driving them both insane. After being cursed at a Chinese restaurant because of their bad behaviour, they wake up the next day to discover that they have somehow switched bodies. Freaky Friday is a great way to start discussions between parents and teens about how they can better understand one another. Or on another level – it’s just a wryly observed comedy that peels back layers in the mind-body connection. For a real Mother’s Day binge you can watch the 1976 version with Jodie Foster. And for younger kids, there’s a tamer 2018 Disney take.

The Blind Side (iTunes)

A mums and sons movie – there should be more of those really. Sandra Bullock won an Oscar for her role in this one – an adaptation of a book by Michael Lewis, arguably the finest writer on the business of sports in the world (see Moneyball). Lewis’s original book told the true story of Michael Oher, who ended up playing professional football for the Baltimore Ravens in the NFL. Lewis followed Oher from his impoverished upbringing to his adoption by Sean and Leigh Anne Tuohy and through to his ranking as one of the most highly coveted prospects in college football. While it’s a sports movie, you don’t really have to know much about sport to appreciate the story here – it is essentially a family comedy-drama that will have you smiling all the way to the finish.

Do you have the fastest available broadband for your home? Find out here.

It’s absolute candy floss – but you know that right? And you don’t care because it’s just so much silly fun. For the record, Donna (Meryl Streep), who runs a hotel in the Greek islands, is preparing for her daughter's wedding with the help of two old friends. Meanwhile, bride-to-be Sophie (Amanda Seyfried) secretly invites three men from her mother's past in the hope of meeting her real father and having him escort her down the aisle on her big day. From the moment the first ABBA song blasts out you’ll forget all the confection and revel on the contagious fun. You’ve seen, you’ve loved, so what the hell: “Here I go again …”

A five-year-old Indian boy is adopted by an Australian couple (Nicole Kidman and David Wenham are excellent). As an adult, he starts questioning his existence, his past. Dev Patel plays Saroo Brierley, a man searching for his family 25 years after accidentally getting on the wrong train and losing them. His relationship with adoptive mother Sue (Kidman) is a central focus of a devastatingly true story that will pull at your heart-strings in a deft and tender way. Maybe it’s the Aussie touch – the director Garth Davis is also Australian – that makes this film so good because the joy is in the understated nature and compelling drama, where an American take on the same story would perhaps have been too overplayed.

Sometimes parents must despair at how parents are portrayed in movies when cast in contrast to their rebellious (or just normal) teens. In an ideal world, you’d want (and want to be) the parents in Easy A. Dill and Rosemary (played by Stanley Tucci and Patricia Clarkson) are the parents of Olive (Emma Stone) in this simple story told so well. Olive, tired of being boring, invents a story about losing her virginity to an older boy and becomes a school pariah/hero. The movie puts an ironic modern spin on Nathaniel Hawthorne’s classic The Scarlet Letter.

Forrest Gump (Amazon Prime) – “My mama always said, ‘Life was like a box of chocolates. You never know what you’re gonna get.’” Well, get some chocolates – a feel-good film for the ages.

Brave (iTunes) – A great Disney yarn to watch with the little ones … a princess accidentally has her mother turned into a bear and to undo the curse they must find a way to communicate in a way they couldn’t when both human.

Kill Bill (Lightbox) – A scorned assassin looking for her daughter makes for some fantastic, if ironic, Mother’s Day viewing.

Mother’s Day (Netflix) – a good title for tapping into the whole Mother’s Day sentiment but a very bad movie. Avoid. Or watch to see just how bad it can be!