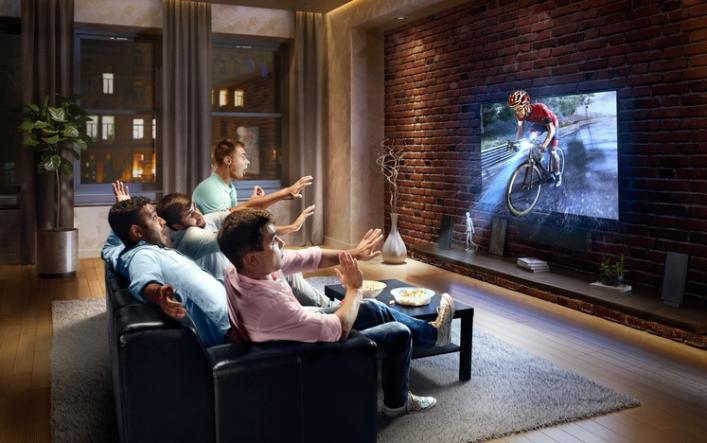 The phrase “Back to the Future” is something of an overworn cliché but it’s also perfectly apt for the future of streaming TV, where old-fashioned ideas will become new again.

The way things are trending, group watching – as we did the old days of terrestrial television – will become more popular in the future, albeit with layers of interactivity. And the concept of getting all your televisual delights in one place rather subscribing to a variety of separate platforms looks increasingly likely.

Covid-19 accelerated some of the streaming advances we’ll see unfolding in coming years as big media companies were forced to rethink their models, particularly as cinemas were forced to close around the world. And rapid advancements in home technology mean we’ll soon be able to get a group-based cinema-quality experience at home.

In terms of picture quality – as our viewing devices get both wider and thinner – we need heaps more pixel density. Right now, the 8K* and OLED technologies outstrip the production capabilities (no-one is currently making 8K TV) but in the future we will be able to watch streaming TV on giant screens with no loss in picture quality.

Today, 4K streaming delivers hyper-real colours and contrast and the artificial intelligence built into these TVs is so good that even ordinary HD quality can be upgraded to a fantastic 4K experience. And so it will be with 8K. But one thing that’s lagged behind picture quality is sound. Streaming hasn’t been able to offer that cinematic surround sound experience that you get at the movies or even with traditional broadcast TV on a home theatre system. But as internet bandwidth increases with the likes of fibre pro and Hyperfibre you’ll be able to stream to a giant screen and have surround sound.

But that’s just first base when it comes to giving you the ultimate viewing experience.

We’ve seen the advent of interactive scripts and story-telling through shows like Netflix’s Black Mirror. That is set to go a step further with the development of virtual reality (VR) goggles.

All the big players – Facebook, Microsoft and Google are working hard on VR that will allow you to be “inside” a show and see the characters from all angles. We’ve already seen versions of this in sport, with immersive cameras, but imagine being inside a scene from Game of Thrones? Woah!

Other interactivity will be more prosaic. Product placements will take a step up, with interactive modes allowing you to buy what you see. Like the bag the lead actress is carrying? Click on it and buy it.  Who knows, if Amazon’s drone delivery system gets super-fast, it might be at your door before the final credits roll.

What we’ll also get is more interconnectedness with friends and family – Netflix Party, now called Teleparty, allows you to synchronise a watching experience with friends. Disney+ has the same capability. And there are third-party providers that also deliver this community watching experience. It will be just like the old days – on the phone talking to friends about Melrose Place during the ad breaks or getting together to watch Sex And The City – but with more choice.

Watching together and texting is one thing, but what about adding a new layer of interactivity with a webcam in the TV so you can talk to your friends on the same device as you’re watching on, with a second screen in the corner. There will be inevitable privacy concerns, but it’s bound to happen one way or another.

We will also get more personalised content – just as Google can serve up ads based on our browsing history, so streaming services make recommendations to us. But that will get more refined until all we are presented with is what we want. My Netflix will look different to yours.

The bigger picture question is how the media giants will interact – with each other and with you. I already have five streaming subscriptions to Netflix, Neon, Amazon Prime, Disney+ and Sky Sports Now. I can’t afford another – neither financially or mentally. Sooner or later there will either be hundreds of ultra-niche streaming platforms competing for your eyes, or the big players will get together and deliver a “supermarket” experience – a one stop shop for all your needs.

This will be another Back To The Future moment. Just as the old cable TV model was to bundle up hundreds of channels under one global subscription,  it’s likely Disney+, Netflix, WarnerMedia and others will join forces and deliver you one streaming service that has everything in it. But because the content is all personalised you won’t know which of them is providing it. That way they are not competing to see who delivers the content, rather you’re picking what you want from the shelf of all available content.

They say, content is king, but the real power lies in the viewers’ hands.

* While you could buy an 8K TV now as a vanity exercise, no-one is making 8K content yet. It could be another 10 years before that happens if the progress of 4K TV is any guideline. And if you don’t know what all these numbers mean here’s a quick tutorial. The numbers refer to many pixels fit across a screen. Normal TV does about 1000, 4K has almost 4000 while 8K has 8000. But when you combine the vertical pixels to create the total resolution what it means is that while 4K has 4-times the resolution of normal TV, 8K is actually 4-times that again or 16-times better than your basic HD. Long story short – the picture looks beyond real – and it will need to if all the other trends in TV unfurl as expected across the coming decade.