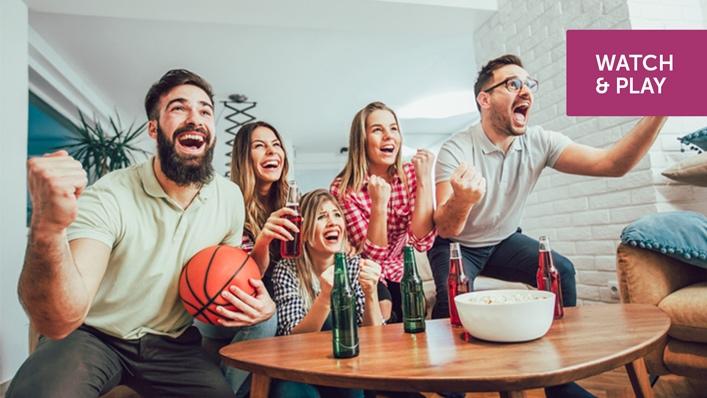 I’m a devoted sports fan but one of the best things I’ve done in recent years is to expand the variety of places I watch sport from TV to online.

With the rise of sports streaming services, and depending on what you’re passionate about, there’s a bunch of options that bring you an array of sport at high-speed and in high definition with many offering a buffet of choices as to how you watch.

The most obvious is Sky’s own foray into streaming, Fanpass.co.nz, but for all the other major sports your heart desires, there’s a way to watch it without time restrictions.

Learn how to get the best home wifi experience.

And what’s more, there’s a bunch of services that used to be geo-blocked that are now unlocked, especially with American sports where the professional sports leagues recognise they now have a global fan base and deliver their own streaming services. The more popular the league, the easier it is to find an excellent streaming service at a good price.  So if you’re a fan of a particular sport you can pay just for that.

Fan Pass is available on a range of devices (from phones to Smart TVs) and is pretty easy to use. You get high definition broadcasts of Sky Sport channels 1 to 4 and some on-demand highlights, all without a Sky TV subscription.  And you can also access pay-per-view content. The six-month package is a reasonable $55.99 per month and that is usually enough to cover you for a sports season like Super Rugby and All Blacks tests or the NRL.  A stand-alone month is a bit more pricey at $99.99.

Spark Sport is a new sport streaming service that will offer global and local sport live and on demand. Spark has confirmed sports through the service will include the Rugby World Cup 2019, English Premier League, F1 and the FIA World Rally Championship. Monthly subscriptions will be $19.99 per month with package details for the Rugby World Cup to be announced in April. The site launches in beta in March 2019 and while in beta, Spark is offering a month’s free trial.

The NFL last season offered an array of packages for live and on-demand HD streams. An entire season is priced at a reasonable $US79.99, or you could follow one team for $US49.99 or even get a quick dip seven-day pass for $US19.99. The app is available on most mobile devices, browsers, and some media boxes, such as Apple TV.

The 2019 Major League Baseball season is about to start and there’s so many options here for fans. When watching on-demand games you can skip between innings and scoring plays. You can choose between home and away broadcast commentary. Extra content including highlight packages and specially edited games is also available. The service is called MLB TV, the app is called MLB At Bat. Last year a season cost $US112.99.

This season there were three main viewing options: you could get the entire season for $NZ324.99, or follow one team only (good if you want to watch Steven Adams and the OKC Thunder!) for $NZ184.99 or get a restricted version that offers eight games a month for $NZ119.99. The app is available on most mobile devices, browsers, and some media boxes, such as Apple TV.

This new service is the international version of PGA Tour Live which used to cover just the early rounds of a golf tournament but offered decent behind-the-scenes coverage and highlights. Golf TV advances golf coverage for Kiwi subscribers so you can watch live coverage of entire tournaments, specified highlights, including a favourite player, featured groups of your choosing, even featured holes at big events. Coverage includes the PGA Tour, Seniors Tour and Web.com Tour.

This is the ultimate home for football fans. The price structure is simple –  $NZ197.80 for a year or $NZ19.78 a month (given football goes for 10 months of the year, it’s neither here nor there what you choose). You get great value for money – especially if you’re following a team outside the English Premier League. You get Premier League, Champions League, Europa League, La Liga as well as lower tier English leagues. This is also available as part of a Sky subscription for a higher fee and watching via Sky is the only way to get HD coverage.

One of the best sports documentaries made. It starts out with an amateur cyclist wanting to see what performance-enhancing drugs can do and ends as a global story exposing the extent of Russian cheating at Sochi winter Olympics.

The true story of how Oakland A’s baseball manager Billy Beane (Brad Pitt) challenges the system and defies conventional wisdom when he is forced to rebuild his small-market team on a limited budget.

Stuff’s movie service has some pretty good titles (free to join, pay-per-view) and it’s the only streaming service that has this multiple Oscar-winning boxing drama starring Hilary Swank.

Tips on how to watch

Your ultimate setup for streaming the content you love looks like this:
Fibre + unlimited data + a Smart TV plugged into your modem.

There are heaps of ways to watch Netflix, Lightbox and other streaming services. The easiest is through an app on your Smart TV but you can also stream shows through your laptop or PC. However you watch, it’s best to make sure your devices are using the best broadband connection so you don’t get the dreaded mid-episode pause while your device “buffers”.