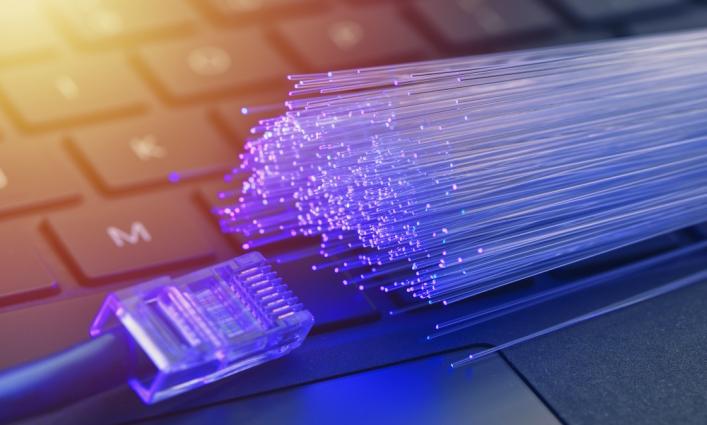 Why fibre is fast without the furious

We’ve all done it - lost the plot when our internet plays up. Thankfully, there’s a solution.

The best way to enjoy fast and reliable broadband is with fibre. But what makes it so fast?

To find out why fibre is quicker and maintains brilliant performance even with multiple users, it helps to understand how the different broadband technologies work:

ADSL is the most basic broadband service. It uses the country’s historic copper telephone network - dating back to 1881 – which goes directly into properties and is what traditional land line phone connections run on. Speeds are unlikely to go above 20 Mbps because it’s limited by the speed that electrons can travel up and down the two copper cables which are twisted together.

This type of broadband requires a modem that connects to the mobile network. That means the speed and consistency can often be affected by a range of factors including number of wireless users and devices on the mobile network, demand in the local area and adverse weather conditions such as rain and fog.

VDSL is around three times faster than ADSL because it uses a combination of fibre and copper. Data travels on the faster fibre network to cabinets in the street, at which point the copper network takes it into properties. Speeds are greatly reduced by the copper part of the broadband’s journey.

Fibre broadband - a network fit for the 21st century

Fibre is a brand-new network, designed specifically to deliver fast, trouble-free broadband to 88% of Kiwi homes and businesses. Without the limitations of other broadband technologies which suffer from congestion or the effects of weather, photons - or pulses of light - travel uninterrupted at almost the speed of light along fibre optic cables. These streams of billions of photons per second are then decoded by our modems into the websites we use, games we play or TV we watch.

1. Glass is pure: fibre cables are made from tubes of glass which undergo a series of processes including being heated and stretched until the core is just 5-10 microns (millionths of a meter). You can see the delicate process here. Even with its protective coating, fibre optic cable is not much thicker than a human hair. Despite being so thin, it can carry enormous amounts of high-speed data over great distances, without the quality or strength of the transmission diminishing.

2. Photons whoop electrons: while electrons travelling down copper cables were quick for 19th and 20th century technology, photons flashing through fibre optic cable travel close to the speed of light. To put that into perspective, data via fibre can travel four times around the world in a second.

3. Fibre delivers tons of data: fibre is also faster because it can deliver and send more information concurrently. Over fibre, data can be transferred at 10 billion bits per second, which means multiple users will enjoy the same speed and reliability from the same wireless connection at the same time.

4. Fibre gets faster & faster: copper’s speed is limited by its natural properties, whereas fibre continues to get faster as technology improves at each end of the cable. Chorus recently announced the dawn of Hyperfibre which will offer incredible upload and download speeds of 2000 Mbps and 4000 Mbps for homes and businesses.

Fibre is the future

Fibre will be here for decades and beyond, with its potential to transport ever-increasing amounts of data being almost limitless.

Chorus’s tech & strategy expert – and sci fi fan – Kurt Rodgers is excited by fibre’s endless potential: “Film and TV have been amazing predictors of future technology. Characters in early Star Trek use what look uncannily like smartphones and tablets. And holograms appear regularly in Star Wars. Holographic communication – the ultimate Zoom meeting if you like - and increased use of Virtual Reality might now be fast tracked, especially in this era where travel may be limited. Wherever our imaginations go, fibre will have the speed and bandwidth to take us there.”